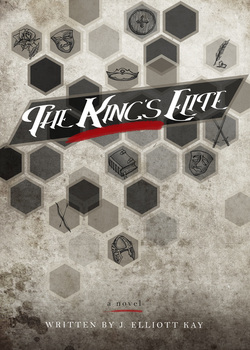 Here is a quick update on the 2nd edition of the King’s Elite.  I’ve received quite a few questions about the 2nd edition so as an attempt to address them, I’ve compiled a FAQ.

Why did you decide to make a 2nd edition?

Writing has been an incredible learning experience for me over the past 3 years. Although I am pretty darn proud of my first book, there were many parts I’ve wanted to change. It wasn’t until I neared the end of the book that I was able to nail down my voice and find my niche in creating a unique narrative. After finishing book 2, The Arbiter’s Onus, my publisher and I both decided it would be best to rewrite The King’s Elite so that the feel of the narrative would be seamless between the two books.

Has the story changed any?

(Minor Spoiler Alert, read next paragraph if you haven’t read the book)
The story hasn’t changed, but upon my readers’ request I have added some depth to the story. Athan stands out more from the rest of the Elite and I added more of a compassionate side to Owin’s story.  Until now I was never fully satisfied with Owin’s character, I felt like my readers didn’t understand him like I intended, which was mainly because of unclear narrative.  The biggest changes you will notice is that a vast portion of the narrative has been changed to dialogue, which makes for stronger characters and better readability.

(For those who haven’t read the book)
The story hasn’t changed, but upon my readers’ request I have added some depth to the story.  The biggest changes you will notice is that a vast portion of the narrative has been changed to dialogue, which makes for stronger characters and better readability.

Is the book longer?

The book will appear longer (about 200 more pages), but that is due to a different format. On average there was 40 lines per page on the first edition. Now we are looking at a little less than 30.  As far as word count goes, I think it is very close to the same, give or take a thousand words.

Do you explain any more about the Syndicate?

Nope, not really. You will learn more about the Syndicate in The King’s Elite and the Arbiter’s Onus.

What percentage of the book was changed?

I’m terrible with numbers, but if I had to throw one out I would say around 30% of the book.  There were multiple edits and changes made on every page.

What goes into making a 2nd edition?

It started with me reading the book and making a list of everything I wanted to change.  I then read through the upcoming book, The Arbiter’s Onus, and wrote down things I would like to add so that the two stories are more synergistic. The rest of the work came down to just reading, cutting, rewriting, and creating new content.  I will have an upcoming post that will go in more detail about the process.  It was a ton of fun though… really!

Are you happy with the final product?

I’ve always been happy with the book, but now after tailoring it more and with a sequel following it, I can honestly say I am thrilled about the story. I am really looking forward to sharing it with everyone.