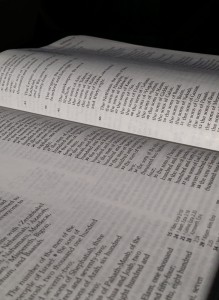 Promises  are a simple concept. Dictionary.com states that a promise is a declaration that something will or will not be done. It’s absolute. You can make a promise, but if it doesn’t follow through then it really wasn’t a promise to begin with, it can only be a promise if it becomes true. Why do we make promises? We make them because at a given time we want someone to believe a truth even when there may not be enough evidence to fully support what we claim.  There is only one credential, that I can think of, that a promise requires.  It must be true. Just like I said, promises are a simple concept. (Don’t ask why it took me a paragraph to explain it)

If this is the case, then why do we have a hard time believing promises that God has made? For many of us, we believe that God is all powerful, all knowledgeable and all loving. These are wonderful qualities for a promise maker to have.  Why wouldn’t we believe anything from a guy with these characteristics? We don’t always believe God’s promises because of the reason I gave earlier. Sometimes there isn’t enough evidence to support what God claims. We get too caught up in the here and now of our lives and we doubt God’s word. Our circumstances have the final say in defining God, and as a result we lose sight of His omnipotence.

Here is a short list of some promises that I am talking about. I am guilty of doubting each of these.

I will make you fishers of men. Matthew 4:19

Not to put anyone down, but… I’ve worked with some really difficult people. I forget these are people in need of salvation. For most of them I would throw my hands up and say, no way! There is no way I can reach these people, or anyone in this environment for that matter.  You know what I am talking about. That godless area. It may be your work, or perhaps the locker room, but God disagrees. He promised us that he will make us fishers of men. Fishermen need tools, skill, and knowledge in order to make a catch. God knows it’s the same when dealing with people. He has promised to equip us with what we need to minister and lead people to Him. When I see that I am having no impact on people I am tempted to think that I don’t have what it takes to win these people to God.  When I stop and observe the situation, I learn it isn’t God that is failing, it is may faith.  I am not acting on His promise, therefore I won’t see it come to fruition.

Even nonbelievers quote this. Do we really believe it? My actions suggest that I don’t.  I can assure you that if I truly believed this promise then I would be giving all the time, but I don’t. In fact I will defend my selfishness with some lousy justification. It’s funny how quickly I will forget that joyful feeling you get when you give to someone.

When the going gets tough I forget this one in a hurry. I’ve noticed that I stop believing this promise the more selfish I get. I will start wanting something different for myself and will then pursue my own ambitions. It’s funny really. This has happened to me several times.  I will deviate from God’s will and blaze my own trail. Eventually life will just start to… suck. It’s been during those moments when I have called God out on this promise.  I remember one evening very well. I said audibly to God in my car, “You said You had good plans for me! Where are they?” He responded, I do have good plans for you… I’ve been wondering why you haven’t been chasing after them?  It was one of those sheepish moments in my life when I wish I hadn’t said anything.

White lies.  They are harmless right? That’s what we would like to believe. Ultimately, that’s why we say them. We don’t accept that the whole truth is more liberating than perhaps an ‘innocently’ twisted bit of truth. God calls us to be radically different from the world. Here is a scenario I am talking about.

A while back I wanted to return a coffee maker. It had broken and had just passed it’s warranty by, you guessed it, one day. To get around the hangup, I devised a white lie. The Lord convicted me before I made the call to customer service. He wanted me to tell the truth. The selfish side of my heart thought that maybe I was going to get a reward for telling the truth. Maybe they would send me a new coffee pot anyway since I am just a day off.  Nope, didn’t work that way.

“I’m sorry about your luck,” that’s what was said.

I ended up having to buy a whole new coffee pot. A little white lie could have saved me some cash, but God wanted to test me. So was the truth more liberating? At the moment, nope. I was a little bitter. But I’ve made it a point to practice being honest in all related circumstances. Over time I’ve dealt with less entanglements (lie to cover another lie) and I’ve had the joy to see the reaction of several different store clerks. They are surprised to see someone remain honest, even if it costs them. Does God use that every time to expand His kingdom? I think so, but that isn’t the only point. I am liberated every time I speak the truth. No matter how petty of a situation I find myself.

Everything is possible for one who believes. Mark 9:23

I think every child raised in a strong christian home has tested this out. I remember one Sunday after I learned that all I needed was faith the size of a mustard seed to move mountains, I went to the kitchen and asked mom for a mustard seed. Once she provided me with one, I decided I had more faith than that and went outside to test this promise.  I pointed to a nearby tree and commanded it to move. After a few more attempts I went back inside defeated. It took me years to give myself an opportunity to grow in faith beyond that level of maturity. I have to call myself out on this often.  Do I really believe all things are possible? I’ll admit I still struggle with this one. I have challenged myself now to claim this promise and to act out on it.

The reoccurring theme I see here is that I don’t act on these promises. Not sure if you really believe a promise from the Word of God? Then evaluate your actions. Do they reflect the heart of someone who believes? It’s time to take a leap of faith. I am choosing to believe these promises, not by waiting for them to pass on their own, but by acting in faith.

Do you have a hard time believing and acting on these or any promises from the Bible? Join me in claiming a promise and then choosing to act on it. Let’s grow in our faith together.