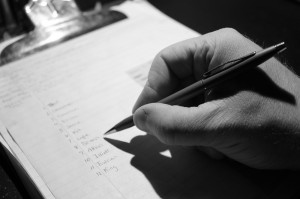 Nothing can kill a great story faster than a poor cast.  Nothing kills a character quicker than inconsistency.

There are at least  three expectations a reader has for each character in a story. Readers want to either connect, hate or love the characters.  These are broad generalizations, but you can boil down a character to at least one of these three expectations. Without these, your reader will lose interest in the character.  As an author it is not your job to establish what expectations a reader will have with your characters. Your primary goal is to make your characters believable. The trick to making them believable? Make them consistent.

This is step one.  Determine whether your character is a static or dynamic.  Static characters change little.  They have little development throughout the course of the story.  Dynamic characters undergo some sort of growth or decline.  Here is list of popular static characters.

Here are some dynamic characters

One of the easiest ways to keep a character consistent is to determine if they will change in the story. As you can see from the list, the protagonist does not have to be dynamic, nor does the villain have to be static. There are only a couple of rules I think writers should follow here.

1.  If your protagonist is static then it is their relationship with other dynamic characters that moves the story.  Make your static protagonist a standard to measure all other characters.  Take Gandalf for example.  He never changes.  He is wise and means well throughout the entire Lord of the Rings trilogy. Bilbo, Frodo, Aaragorn and King Theoden all change on their journeys with Gandalf. Gandalf is an excellent example as to how a static character brings about change in dynamic characters. If your protagonist is static and there are no dynamic secondary characters, then the primary driving force of the story is how your static protagonist overcomes their dilemma.  At first this may sound boring, but James Bond, Indiana Jones and Superman do it all the time. What makes their stories exciting is that the reader is familiar with the heroes’ limits. The best stories about static heroes without a dynamic support cast are the ones where the conflict capitalizes on the protagonist’s weakness.

2.  If you are writing a dynamic character, regardless of their role in your story, you must be thorough in their transformation.  If they are undergoing a change, be sure to show it to your reader. The tricky part here is to avoid writing too much so you don’t bog down the narrative. The best transformations are the subtle ones, spanning chapters over the course of the story. A little rule that I follow;  Only describe a character as it pertains to their development.  In other words, don’t describe every little detail the moment you first introduce a character.  Break it up, and add the little extras as they become relevant.

Listen to your character

Does your character sound the same throughout the story? Obviously you can’t hear your character.  I am talking about their word choice, cadence and attitude.  Does it all stay consistent?  Does it fluctuate?   If so, show the reader why.  Feel free to change your characters voice, you can add depth to them when you do, but it can also hurt them if you are not careful. Do you have a timid character, who usually speaks below a whisper,  yelling at the top of her lungs? If so, show your reader why.  With each action and word you give your character, you are either reinforcing or changing the vision the reader has about the character. Change is not bad, but if done too much, the character will feel inconsistent thus will not be believable for your readers. Show why there is a change, and it will strengthen your character.

Notice I keep saying show and not tell or explain. Don’t tell your reader that character is sad, show them. Write their visible emotions, be thorough with their word choice.

Put their sadness into context.

Most successful authors will tell you that you need to read, read and then read some more to sharpen your craft.  I agree, but some of the best advice given to me suggested that I listen to real people.  Listen to how people talk.  Listen for their vocabulary, their tone, their cadence. Everyone is different.  I usually pick out a person I know in real life and use them as a model for a character that shares similar traits. For example, I know of a doctor that resembles my character Fadrien from The King’s Elite.  When writing dialogue for Fadrien, I kept asking myself, “What would Dr. Johnson say?”

Listen to your readers

Your readers are always right. It’s an ugly truth, but a truth nonetheless. If you haven’t read On Writing by Stephen King, you ought to.  In it he describes his writing process, dividing it into different phases. “Write with the door closed, rewrite with it open,” he says.  What he is saying is to write your first draft with the door closed.  Stay clear from the opinions of others while you are first crafting your story.  When you get into the rewriting and editing stages, you need to listen to the comments of those who have read your work.  Be prepared. There are a few things readers of your first draft will say that makes your skin crawl, but you best listen.

“What?  That doesn’t make sense.  Why would he/she do that?”

“I don’t see her/him saying that.”

These are the types of comments that should grab your attention.  Readers sniff out inconsistencies in a hurry.  If something doesn’t seem believable to them, ask why.  Usually there is bit of information in your head that you left out.  Don’t be defeated when your proofreaders pick out problems in your story. Think of it as an opportunity to make the cast and plot more believable.

I hope this helps.  It has been a great reminder for me as I gathered my thoughts together for this post.  If you have any questions feel free to comment below. Also, share any tips you have for writing believable characters.